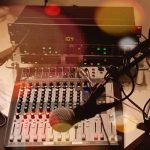 Problems with the sound

If you’ve seen the video of the latest Singalong Sunday, you’re already aware that things with the sound didn’t go as well and smoothly as we anticipated. And that’s an understatement!

If you haven’t seen it yet, take this as a warning, so you’ll be able to see through it (or just plainly skip the first three songs!).

What happened there? Well, right after the start of course we asked the viewers to let us know if the sound was okay. We were expecting to see things like thumbs up and ‘yup, all great’, but that turned out a little different.

Instead we received messages like ‘are you in a well???’, ‘there’s an echo’, ‘reverbbbb’. What the heck was going on?

Maurice actually had no idea, he had turned the reverb down immediately, but the viewers kept saying that it was unbearable to listen to. Then one smart lady said ‘it is as if the sound comes in twice…’. She’s won the fridge (figuratively speaking, of course hahaha), because THAT was exactly what was happening.

What was the problem?

And as soon as she said that, Maurice knew what went wrong! We had tested with the sound element in my guitar, but just before we started the live stream, the element appeared to be unreliable and unstable. So we changed plan instantly, and he put a microphone on a stand in front of the guitar.

So far so good. But what he didn’t think of in the heat of the moment (we were about to go live, so there was stress to start on time!), was that he delayed the sound of the other two microphones with 200 milliseconds to synchronize the sound to the camera image.

And THAT was what went wrong… the guitar mic was not adjusted, so the sound came in through that microphone first, and then it came through the other microphone 200 milliseconds later. Appearing to be an echo, but in fact it was the sound being broadcast twice.

When he realized that this was the cause, he adjusted things and the sound got a bit better. But not half as good as we had wanted it to be!

So that was another lesson learned. Every week we’re improving, because Maurice is getting more skilled in the things he wants to do and I’m doing my best to sing, play and perform better each week. And of course to come up with new songs week in week out 😉 .

Thankfully I’ve got a lot of input of you and the other viewers, because they keep them requests coming in every week. And thanks to you I’ll be playing my 10th Singalong Sunday this week!

But before it’s Sunday, you might wanna watch the last one. Even though the sound was bad, I did play some beautiful songs! Check out the song list right below the video!

The blog continues below the video and the song list!

Another thing that went wrong with the sound last week, was that I had positioned a ventilator in a wrong angle, which made it blow to my microphone. Afterwards Maurice said: “there was something weird with the microphones. Like somebody was heavily breathing in the mic, but it also happened when we were both silent. What could that be???”

While watching the replay myself, it didn’t take me too long to discover what it was. My ventilator (or is it fan?)! Oops… sorry!! Never realized how many things could go wrong. Add more equipment to it and more things can go wrong (and of course they will hahaha, that’s nothing uncommon for us).

Get it right next time 😉

With all those problems discovered and solved, it should go right on the first Singalong Sunday, which is tomorrow May 24th!

So join me then and let’s have another party! Yihaaa!