Before I tell you about Handsome Molly, I want to share some relevant history. (And tell you that this blog is also available as a Tabby Reads video).

Years ago, in my first marriage, we had friends that were music lovers just like we were. Especially live music. So every year when there was a summer festival in our town, Zutphen (NL), we would go out together to watch and listen to the bands that were playing there live.

In a small alley was a cafe where they used to build a stage opposite of the cafe, right in the alley. Soon as the evening would fall, the crowd gathered in front of it, watching the bands up close.

One of the bands from that time I can still recall, was the Dutch band ‘Personnel’, with Ad Vanderveen and Philip Kroonenberg. It was 1990 or 1991. It’s partly thanks to their CD ‘Only’ that I still remember them. I purchased that CD back then at the end of their concert. Every once in a while I still play that album. But it always reminds me of the fun we used to have with our music loving friends.

And one of these friends was Ton Terink. I never really expected him to start playing guitar, although I’ve always known that he had music running through his veins. Through the years we lost contact, but after about a decade we got back in touch again through social media. In the meantime Ton had started playing in bands and, together with drummer Lody Willemsen, even formed his own band in 2010.

This band is Handsome Molly and to this day they’re rocking the stars from the sky. Actually, they’ve just released their latest single, which gave me a reason to put my Sunny Sunday spotlight on Handsome Molly. You’ll soon understand why.

So, no coloring or drawing artists this time, but musical artists: a classic rock band: Handsome Molly!

Like Personnel, the previously mentioned band, Handsome Molly is a Dutch band. This four-piece formation is based in Apeldoorn, which is a city in the Eastern part of the Netherlands.

As they state on their website they play “classic rock from the 70’s/80’s, combined with (power) blues and a touch of soul/country/folk“. They play covers, but beside that they also play “many of their own original pop-rock songs, from swinging steaming rock to sensitive ballads” (freely translated from Dutch to English by yours truly ;P ).

My understanding is that most of their original songs are written by Ton Terink. (Correct me if I’m wrong 😉  )

In 2015 they released their first full album, called ‘Free’, and the single ‘Sweet Dreams’, for which they made a videoclip. In 2017 they made it to the Dutch national radio station 3FM with their single ‘Put down the barrel (Reunite)‘. This song was especially written for the Dutch 3FM Serious Request, a special fundraiser program during the week before Christmas.

In 2017 Serious Request was broadcast from Apeldoorn, the hometown of Handsome Molly. Coming from Apeldoorn made it a no-brainer for the band to do something for this special occasion. It helped a good cause and gave them some national attention, which is always a good thing for a band!

Another thing worth mentioning, is that ‘Put down the barrel’ featured the Bombitas, the ladies that also were the backing vocals for Herman Brood (and many other artists and bands). A great combination with Handsome Molly!

Their third single was released in October 2018. Another original called ‘I rather die‘. The band chose to not release this as a physical CD single, but instead release it only on streaming platforms such as Spotify, iTunes and Napster.

Time for something new

And now it’s nearly two years after releasing their last single. About time for a new one to get the fans rocking and enjoying Handsome Molly’s rocking abilities again. This time they chose for a song written by someone from outside the band. Well… this requires a little prequel.

As you’ve probably seen earlier this year, I’ve done twelve live streams on Facebook, where I sang and played guitar every Sunday to entertain my followers during the Corona crisis. I called these live online gigs ‘Singalong Sunday’. 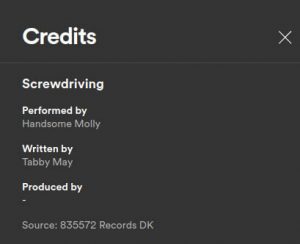 Ton Terink was a regular participant in the live chat and one day we agreed that I would sing a song he wrote for and recorded with Handsome Molly. That song was ‘Ivory Smile’ and I performed it during my ninth Singalong Sunday. In that same gig I also played a song I’d written back in 2004, called ‘Screw Driving Guitarist’.

That resulted in a kind of a ‘trade’: me playing ‘Ivory ‘Smile’, and then Handsome Molly would play my ‘Screw’ song. But I didn’t really have any expectations. Until I received a message from Ton, end of July, with a recording. I was totally flabbergasted; they had recorded my song! It did sound soooo good, sooooo rocking. And it finally had a guitar solo, which I had always wanted for this song.

And to top it up, Ton told me that ‘Screwdriving’, as they called the song, will be their new single! Yesssss… whoop whoop *doing a happy dance*…

Release of the new single

I got notice from Ton on my birthday that they were about to release it, which was a hell of a birthday surprise, I can tell ya!

And yesterday, the day after my birthday, ‘Screwdriving’ was presented on their Facebook Page as their new single. It’s also on Spotify now, which I’ve embedded below for y’all to listen!

I really love the sound of this song, the heavy guitars, the bass, the steady drums, the guitar solo, and the familiar voice of my long time friend Ton. And I love the fact that it’s Tabby May morphed into Handsome Molly, yeah!

And then keeping in mind that the original, really existing, ‘screw driving guitarist’ about whom I wrote this song in the first place, probably has no idea that he’s become immortal in a song (or maybe he does, I wouldn’t know hahaha).

Well, after that I’ve got one thing left to tell you. As I’ve promised when I ended the first ‘season’ of my Singalong Sundays, I’m about to return with a new season. I’ll start again next Sunday, September 20th. I will make only ONE announcement on my social media accounts.

Using my socials once again, is mainly to promote Handsome Molly’s new single. But beside that, I also want to remind everyone that’s interested, to come and join me on Sundays from 8pm CET (7pm UK time, 2pm EST and 11am PT).

If all goes well (fingers crossed!) my Singalong Sundays will be here on my website, no more on Facebook! So remember to go to TabbyMayArt.com (bookmark my website and subscribe to my push notifications, then you’ll be sure to get notified!)

So, I hope to see you in the live chat and if you have requests for this first episode of the new season, let me know. You can leave your requests in the comments below or through my contact form.

This next season will be different than the first one, because it previously took me a week to prepare, which didn’t leave much room for anything else. So, the format has changed a bit, but you’ll see when I’m back as of next week.

I don’t mean to be pushy, but please do me and Handsome Molly a favor and spread the word by sharing this blog. And then go and follow Handsome Molly on their Facebook page, their website and of course on Spotify. And most of all, enjoy all of their music, they’re absolutely worth a listen!

Well, that’s it for today.

PS Our love story, including never before seen footage of our wedding (!) is online!