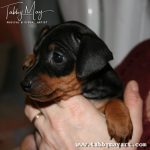 Recently I posted my review of the coloring book Masja’s Fairy Tales. In that blog post I told you about my memories of when I was a little girl and how I have always loved fairy tales. After writing all that, and eventually posting it on my website, I was thinking a bit more about this topic. And suddenly it struck me that I’ve had a living fairy tale for nearly nine years!

(If you’d rather listen than read, go straight to the video, where I’ll read it to you, with some extra, funny footage! Otherwise, read on below the video. Enjoy!)

How could I forget to mention her in my previous blog? Well, maybe because the name we used to call her wasn’t the name that she received when she was born. Her pedigree name was Fairytale, but we never called her that. To us she was just Daisy. 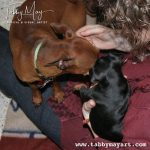 She was born on March 16th 2011, a tiny, pretty black and tan miniature Pinscher girl. She was the sister of Casanova, a red Min Pin, whom we gave the call name Richy. They shared the same parents, but she was sixteen months younger than her ‘big’ brother. By the way, Richy was born on November 21st 2009 and he came to live with us when he was three months old, in February 2010.

These two little rascals made a lot of noise. When you’re familiar with Min Pins, you know what I mean. Barking over nothing, running around nervously all the while barking, growling (especially at each other, or at anything outside that has an unfamiliar sound). And howling.

Somehow I discovered that Richy could howl. Like a wolf. Well, a very VERY tiny wolf hahaha… And over the years we managed to control his howling. We turned it into a pack howl. Daisy wasn’t very good at it, she was more crying like a baby haha, but she tried. I even got them to howl along with a Boney M. song. At the “ooooh ooooh ooooh” part the doggies would howl along, as loud as possible. Looking at us to make sure we were joining them, after all it was our pack howl, and we were part of the pack 😀 .

Unfortunately, we never filmed them howling along with Boney M. (or I can’t find it, because we’ve got a gigantic amount of photo and video material of them). I did find a short video of them howling though, which gives a good idea of the rumpus they could make 😀 . (That video is included in the video I’ve made for this story!)

Another very funny thing with Daisy was, that she sometimes thought she was a rescue dog. As many houses here in Southern Spain, our house came with a swimming pool. On hot days we often took the doggies with us in the pool, to cool off a bit, but they didn’t really like it.

Until we discovered that Daisy went totally wild when one of us made a lot of noise and waves in the water… As if she thought we were drowning! She would first hesitate, but after a couple more loud splashes, she would jump in! Of course she had no idea how to rescue us, so all she did was speed swim towards the way out of the pool 😀 . (Footage of Daisy in action in the video!)

Richy had other skills. He was a master of escape. Uncountable times he found his way out of gardens, only needing a tiny hole in the fence. One day he had his masterpiece performed. This was before we fenced off a part of the garden of our current house.

To keep the doggies at the back of the house, we barricaded the side of the house with two stacked garden storage boxes and a wooden crate. On top of the crate we would put two large plastic planters. To us it looked quite solid and blocked. But we underestimated our little Houdini. See for yourself in the video…

Sad enough, the fun we had with and about these two, slowly started to fade with the passing of the years. 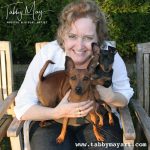 As for throngs of people 2020 has been a disaster, due to the Corona situation. For us 2020 caused some other problems. Minor problems compared to the problems of the world, but to us, especially to me, they were real problems.

I can’t recall when exactly the trouble really started and gotten worse, but I know for a fact that our tiny ‘fairy tale’ Daisy became more of a horror story in the end. She never was totally housebroken, she used to drop her urine on lots of unexpected (unwanted!) places during her lifetime. We’ve had many a wet sock because of her uncleanliness. And one day, approaching the end of 2019, she added defecating to her repertoire.

Of course she had been doing that all her life, as we all do, but I mean that she now started to drop her feces wherever it suited her. Outside as well as inside the house. Anywhere! 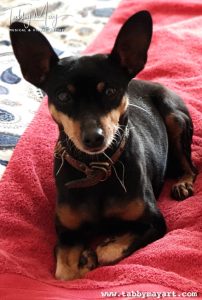 That day the problems actually started. Especially when it became a daily routine, or should I say a Daisy routine? I won’t go into detail about the things we tried to solve this, but when every day started with having to clean a dog crate filled with dog poop, and bathing a dog that had been rolling in it… pffff, I’d had enough. And the vet had no clue either how to solve this, we had to end it.

I already mentioned this at the end of a blog post, early February this year, where I said that I planned to write a kind of ‘in Memoriam’ post. This is that post.

I can tell you that this was one of the toughest decisions we ever had to make. But there was no other choice. So with pain in our hearts, we had to let her go and wave her out as she crossed the Rainbow Bridge… So that was the end of our living Fairytale.

Unfortunately, the same happened half a year later with her brother. He had been peeing everywhere all his life. Vacuuming the house was the fastest way to discover all the spots he left his ‘waste’ at. Was it a genetic thing? Had it already gone wrong with the breeder? Watching the videos that we’ve made in her house, we think it was actually a pretty unclean situation for a litter of puppies. But back then we didn’t have eye for that. We just looked at our new family members! 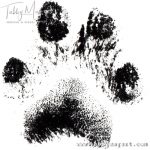 Anyway, according to the vet it was a behavioral problem, and he saw no solution other than to euthanize, after we had tried everything we could think of. So, early July we had to say goodbye to Richy too. And beside an enormous amount of pictures and videos we took through the years, the only physical thing we’ve got left of them, are their paw prints.

I’ve made those with stamping ink put on their paws and then pressed them on a piece of thick paper, as little keepsakes of my two loud, mischievous Min Pins.

Now we only had one remaining dog, Scruffy, the stray that I rescued in 2018 (and our rescue cat Mercy, but she mainly lives outside).

But as the title of this story already revealed, there were more fairy tales in my life. Another one is the story of me and my husband, Maurice. If you’ve followed my ‘love story’, then you might have already guessed that. Our story is a bit like a fairy tale. Bad things happened, we got separated against our will, but then we found each other back again. Now, doesn’t that sound like a fairy tale?? And the story wasn’t finished yet.

However, since this story above, about my doggies, has become such a long one, and I’ve now got a special ‘stories category’ on the website, I’ve decided to put all previous four installments of our story together in one. And in that one story, I’ll finish it and tell you what happened to get us back together, happily married and all 😉 . I might even share some wedding video, because that in itself was a fairy tale as well!

Just bear with me, because I’ve also got several other things up my sleeve for the website. But I won’t let you wait very long.

So greetz for now, talk soon!