How a bag could trigger a memory of 1977

It’s been years since I’ve seen her in real life. But through social media we found each other again and for the last couple of years we’ve stayed in touch, online. The person I’m talking about is someone I share a history with in many ways. A history that started even before she was born.

But let me start with what triggered this story: a bag! A handmade bag.

If you’d rather listen than read, go ahead and skip to the video below, where I’ll read it to you, with some extra footage! Otherwise, read on below the video. Enjoy!

It was on Valentine’s day, February 14th of 2020. The world was still quite normal, although people were already starting to get nervous about that new virus that was coming to ‘visit’ Europe from China. I don’t follow much of the news, so I had no idea that our world was on the verge of changing completely, in a way we couldn’t even imagine.

That day I was happily surfing on Instagram, but I stopped when MissEsBags posted a picture of a bag, combined with a clutch/woman’s wallet, she had made.

So I instantly typed a reaction to her, asking what the price of that set was. My bag had a broken zipper, so I was already looking out for a new bag, and now I had seen this one… This was an absolute must-have! She replied through WhatsApp, where we continued our conversation and made a deal. Yeaaah, I was about to get a new bag… whoop whoop!

The plan was that we, my husband and me, would fly to the Netherlands end of March, to visit our children, family and friends. So Miss Es and I figured that this would be perfect to see each other again after many, many years, and I could pick up my new bag in person.

Unfortunately things took a totally different direction after that.

March came and people around us were getting more and more nervous about the Coronavirus. Then we got notice from the airline… our flight to the Netherlands was canceled. A couple of days later, a similar notice about our return flight, and before we knew it, Spain went in total lockdown! Holy sh*t!

Pretty soon after the lockdown started, I decided to bring some fun and entertainment online. I did this by means of weekly live streams on Facebook, where I sang and played guitar. (Side note: I will start doing this again as of September 20th!) Miss Es was one of the regular guests, and we had a lot of fun, week after week. My first try of ‘Lola’ (the Kinks), requested by her, was quite hilarious, at least in my memory. What I remember, is that I completely screwed it up ?.

In the meantime she contacted me through WhatsApp to ask me what fabric I wanted for my bag. She gave me several options. I had asked for a black and white fabric, and she had lovely designs, one of which I immediately fell in love with. For the lining I asked for something lilac, which is one of my favorite colors.

She gave me the option for a light lilac or a more dark violet and I chose the light lilac. I also had a choice in what type and color hardware I wanted, so I chose the silver/chromium look. Now at least I had a slight idea of what my bag would look like in the end. Although, it’s always hard to imagine the looks of something if you haven’t seen it.

Months came and went, and my husband an me made new plans to go to the Netherlands in August. That month we would have two birthdays, of our grandson and of our eldest niece who would turn fifty. But the situation in Spain was too unstable to risk leaving home. So again, we postponed our Dutch trip, and Miss Es and I had to decide to postpone the bag handover to a later date. Again.

Well, she now at least had more time to make it, without having a deadline.

And then, about six weeks ago, I suddenly got a notification from Instagram that I was tagged in a post. I clicked the link and opened a post by Miss Es… My bag and clutch were finished!!! In an instant I was totally excited and soooo happy to finally see the end result of her magnificent sewing skills!

Then August came. We made new plans and arrangements to go to the Netherlands in November, this time by car, bringing along Scruffy, our last remaining and youngest dog (that’s another story!). But still, to this day, it’s not 100% certain that we will be able to pursue these plans. So Miss Es and I agreed, that it would be best if she would send the bag to Spain.

Besides, I didn’t wanna wait any longer, I wanted to see it for real. Hold it in my hands, feel the fabric, touch the hardware, put my things in it, show it off to my friend here in Spain… I wanted the real deal! 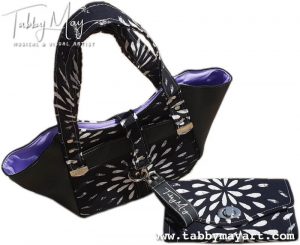 And so after a week on its way to Spain, it arrived… (I filmed the unboxing, it’s in the video above. But let me first finish my story!). I was really stunned by the precision of her stitching work and the beautiful detail of how she placed the pattern of the fabric. The faux leather, the hardware… And that was just the outer part of the bag!

At that point I hadn’t even seen the inside, nor the details of the clutch/wallet!

Perfectionism in a handbag

When I opened the bag I can’t describe it other than that I fell in love. The color, the perfectionism expressed in what I saw, the sewing, the layout, the different compartments… It just blew my mind. I don’t know what exactly I had expected, but what I got delivered was way more than I expected it to be!

Then I took out the clutch… Really, what a wonderful piece of craftmanship! It is so beautifully finished, that it certainly wouldn’t look out of place in the Spanish department stores of El Corte Inglès, which is the third largest department stores chain in the world! They sell a lot of high end, expensive bags, clutches and wallets! In fact, I have been looking more than once in El Corte Inglès to find a handbag, but what I saw was way overpriced or far too ugly.

I did buy a woman’s wallet there, and have been using it until I received my new one from Miss Es (I instantly transferred all my cards and thingies from my old one to the new), but that one was a rather plain and simple one, and it wasn’t exactly cheap. But it did what it had to. While this new one, combined with the handbag…. this is what makes a girl’s heart happy!

Actually, it shouldn’t have surprised me how skilled Miss Es is. Like I said when I started this story, I’ve known her for the longest time. And I’ve known her grandmother, who could also sew beautifully. When Miss Es was born, I was a toddler. Her mother and mine were close friends, like sisters. Her two older brothers and her, and me and my younger brother, we all grew up together as if we were cousins, although there was no familial relationship.

However… that familial relationship sort of came in 1977. My father’s younger brother happened to fall in love with her mother’s younger sister. When my uncle and her aunt tied the knot, she suddenly became a niece of my uncle, and I became a niece of her aunt! (Her aunt, and for 43 years thus my aunt as well, I have known all my life too.)

When our uncle and aunt married, I had just turned nine years old little under a week before. I can still recall their wedding day with vivid memories. Before the wedding we all gathered at the house of her aunt’s parents, Miss Es’s grandparents. And after the official ceremony in the town hall, we all went to a kind of community building in a playground, for the wedding reception.

I still remember my little six year old brother, who was kind of clumsy at the time, spilling his drink over the table and his neat clothes. And I can still see the band that played, in my mind’s eye. Even then I was already fascinated by live music. And I recall the long skirt my mother had sewed for me. I wore a matching blouse with it (well, I don’t think it was really matching, but that’s in hindsight hahaha).

Back to the bag

Well, it’s always nice to do some reminiscing about times long ago… A lot has changed in those 43 years since, but it’s a good feeling to know that there are still people from my past in my present life. People that feel like family as well as people that are family.

I know I’ve lost many people, when I left my former religious group (as I’ve talked about in an earlier blog), but there are a few that stayed, and some have returned back into my life. And for those people I am utterly grateful ❤️. Miss Es is one of them, and I can hardly wait to see her in real life again. Hopefully that’ll be in November, if all goes well!

For now I’m more than happy with my new handbag and clutch/wallet, so Miss Es will definitely be in my thoughts very often from now on! Thank you, sweet bonus cousin, I’m a happy camper with my MissEsBag!

To show my new handbag in more detail, I took some photos and made a gallery of it. Click here to see the corresponding photo gallery!

And last, but not least, I’ve made a video for you (which you’ve probably already seen haha). The video contains two things: this story read by myself, as a kind of pod/vodcast, but also the unboxing of the handbag when I finally received it! So, go ahead and check out the video if you haven’t done so already!

And hopefully I’ll see you again for my next story! (Please let me know in the comments section below if you liked it! And if you did, don’t forget to also share it!)