Below the video is the blog. If you don’t like reading, go watch the video, where I’ll read it to you, on camera, with some bonus footage! Otherwise, read on below the video. Enjoy!

House pets can have major impact on our lives. Some of them become true family members. So, when I read my creative friend Michelle’s blog, on her website Have Color Will Travel, about her beloved kitty-cat Willow, I could totally relate.

Willow, almost 18 years old, passed away end of January ’21. Michelle’s blog shows the deep affection she and her family had for Willow.

In her blog Michelle asked her readers to share in the comments “about the important animals in your life and how they have shaped your art and informed how you move through the world“. So I replied.

Willow inspired even me!

When I read again what I wrote as a reply to Michelle, it suddenly struck me that my reply was almost a blog on itself. So I copied it and pasted it onto my own website, and added a few more stories and some pictures to it. And that’s what you’re about to read now. So thank you Michelle for inspiring me to write a new blog!

And Willow, even after your passing you’ve managed to influence people, all the way across the pond… 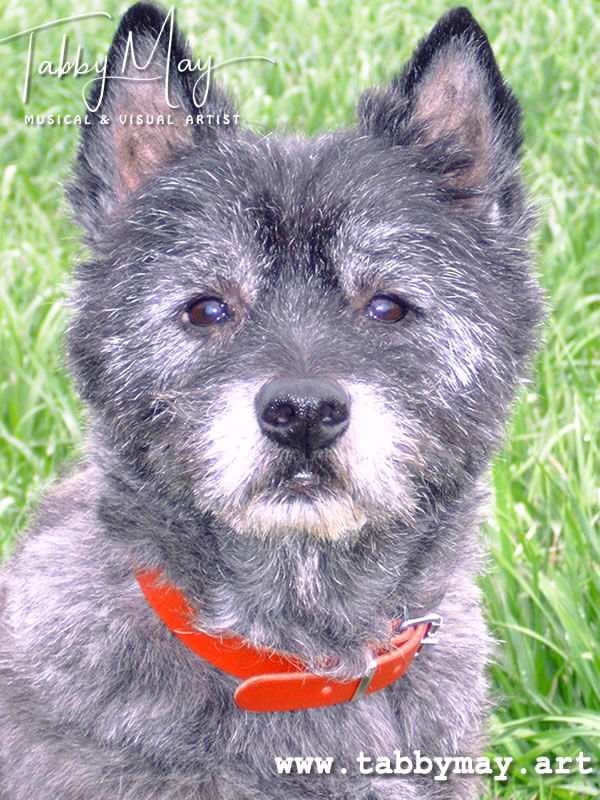 Back in time, reminiscing

My animals are and were all deeply loved, and I’ve had quite a few. From rabbits to birds, from cats to dogs, from hamsters to rats, even a couple of walking sticks at one time (they were my son’s actually)! Oh and don’t forget the fish! But there are a few that made it to that extra, extra special place in my heart.

Like my Cairn terrier Misty. We’d better had him named ‘Mischief’. He was adorable and mischievous. When he was younger, he took every chance he got to run off to ‘walk himself’. I recall several times when I asked the children “where’s Misty?”, when they were playing on the street in front of our house with the front door open. 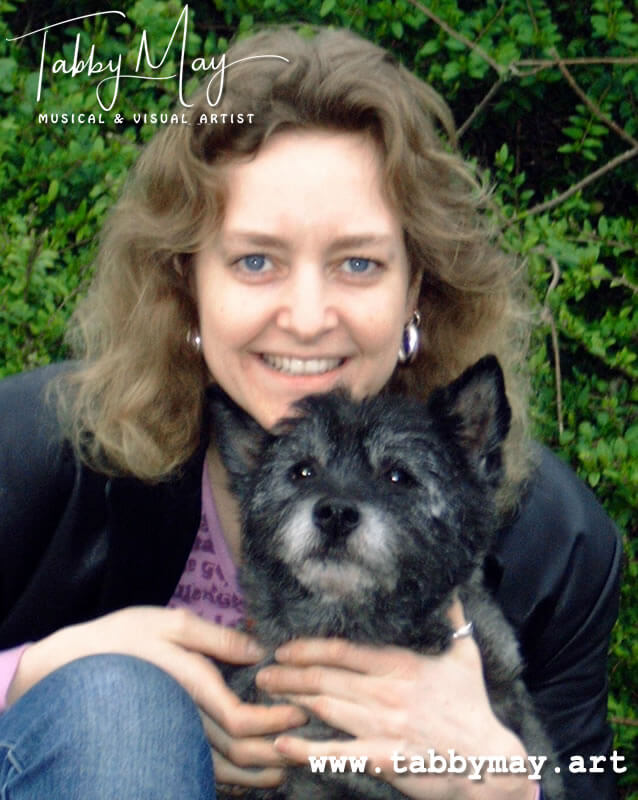 The answer I usually got was shrugging shoulders, and then me chasing off to the nearest lawn, calling out the little monster’s name! He usually wasn’t very far away, but he had to cross a busy street to get to that lawn. Luckily it never resulted in accidents, but the thought of what could happen always gave me the creeps.

The comfort of a canine companion

After leaving my first husband, I took Misty with me. Which has kept me alive, literally. When I stepped out of the marriage, I also left the cult I grew up in. It made me lose more than my home and my family. Having my little dog with me was a comfort in very difficult times.

Especially one specific time. If Misty hadn’t been there at that moment when I was at my lowest point ever in my life, I wouldn’t have been here today. He was the one that made me choose living over ‘leaving’ in the zero-hour. 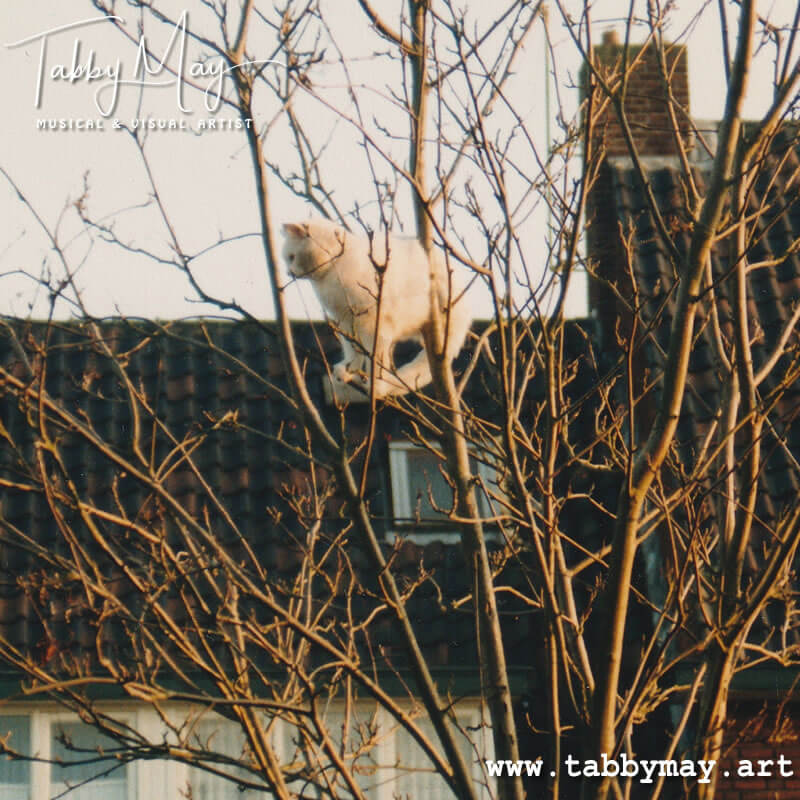 There were also two felines in the past and recent past, that made an impact that will last for the rest of my life. First there was Snowy, Mr. Snow White in full, a perfectly white cat. He was already grown when we got a puppy, Misty. They were buddies from the start.

Snowy taught Misty how to climb onto the windowsill, to sit there brotherly side by side, watching cars, pedestrians and cyclists passing our window. Whenever they saw me passing by on my bicycle, Snowy would stay there sitting like a Sphinx, but Misty would always jump off and hurry to get in his dog basket. And when I then entered the house from the backside, he always was apparently ‘deep asleep’!

Another thing I’ll always remember is that Snowy brought me ‘presents’ on an almost daily basis. Usually in the form of (nearly killed) mice and birds. We lived near the city center, but he came straight from a farm when I got him as a little kitten. So he was a trained hunter.

Hence that Snowy needed his space, he needed to be outside every day. He loved to roam around in the neighborhood and curious as he was, he sometimes cheekily entered the houses of our neighbors to check out what was on their kitchen counters. Unfortunately this most likely caused his death.

One day he didn’t return home and after a couple of days I paid a visit to the police station. There I learned that one neighbor had taken our Snowy to the police station just a few days earlier, stating that our cat had eaten food from his cat, or something like that. The officers on duty told me they had sent the man home and ordered him to release the cat.

Snowy never returned. He was about four years old when he disappeared. Even years later I sometimes thought that I heard him meowing at the backdoor. 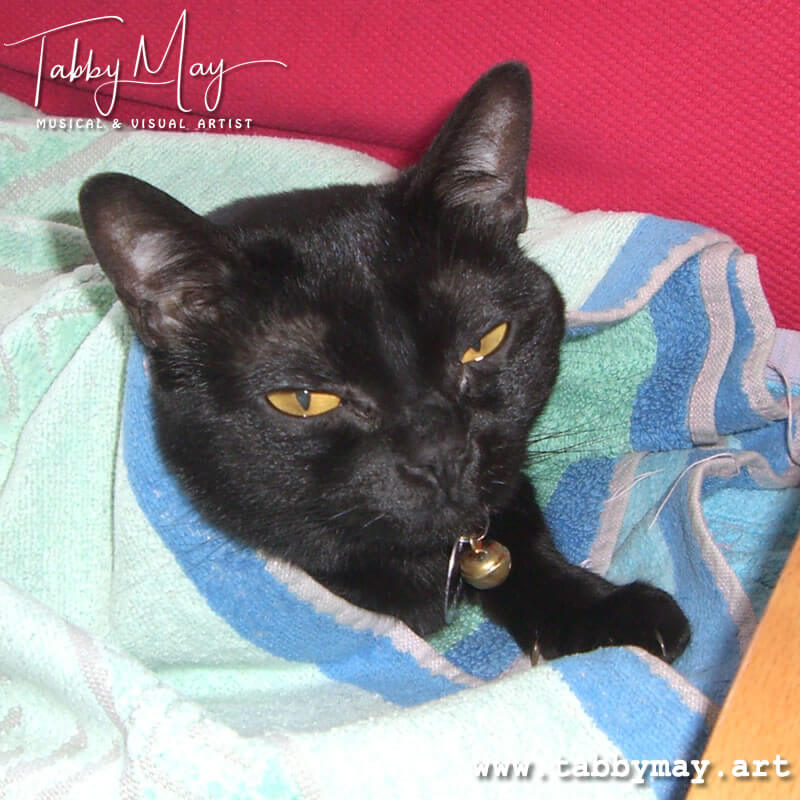 In 2011 we got our first purebred kitty and we named her Lucy. In between I have had some other cats, but only for short periods (two I got from a shelter and within a year they were gone one day, disappeared. And another one, also from a shelter, would attack us and pee everywhere in the house. So after six months of trying hard, we had to return her). 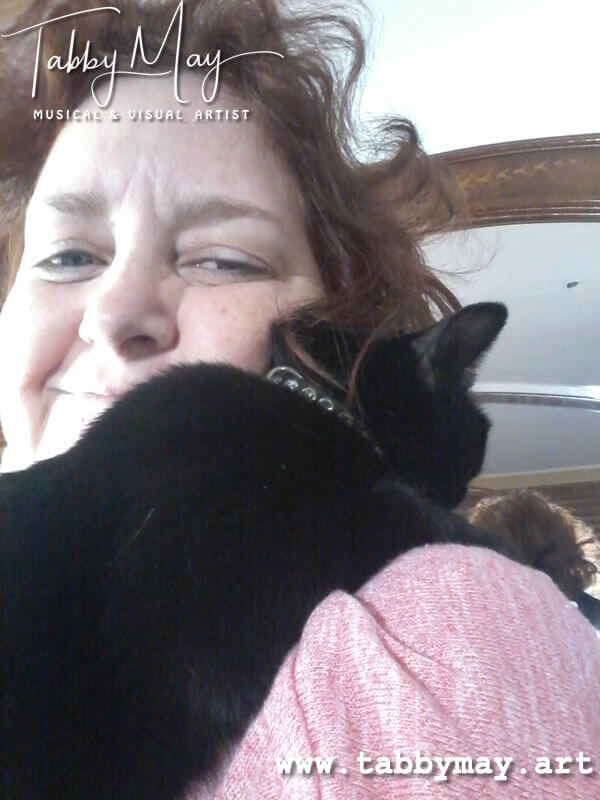 But not Lucy. She was a beautiful, tiny black Bombay kitty who would always be sitting (or rather hanging) on my shoulder. When I wanted Lucy to get off of me, I just had to bend forward, then she would claw her front paws’ nails in my shoulder and drop her hind legs into the air, waiting for her feet to touch the floor.

And only then she would let me go. Usually looking at me with a face full of resentment, as if she thought “now really, human, was that necessary?? Did you really need me to leave the very best spot in the world??? Tsssss…” and then she would walk away with her nose up high.

In 2016 she suddenly fell ill, and within a couple of weeks we had to let her go. She was one of the sweetest cats I’d ever seen and she had the most beautiful yellow eyes. Gosh, losing her was heartbreaking. All those memories… there are many, and they’re all are little treasures that I’ll forever keep in my heart and soul. 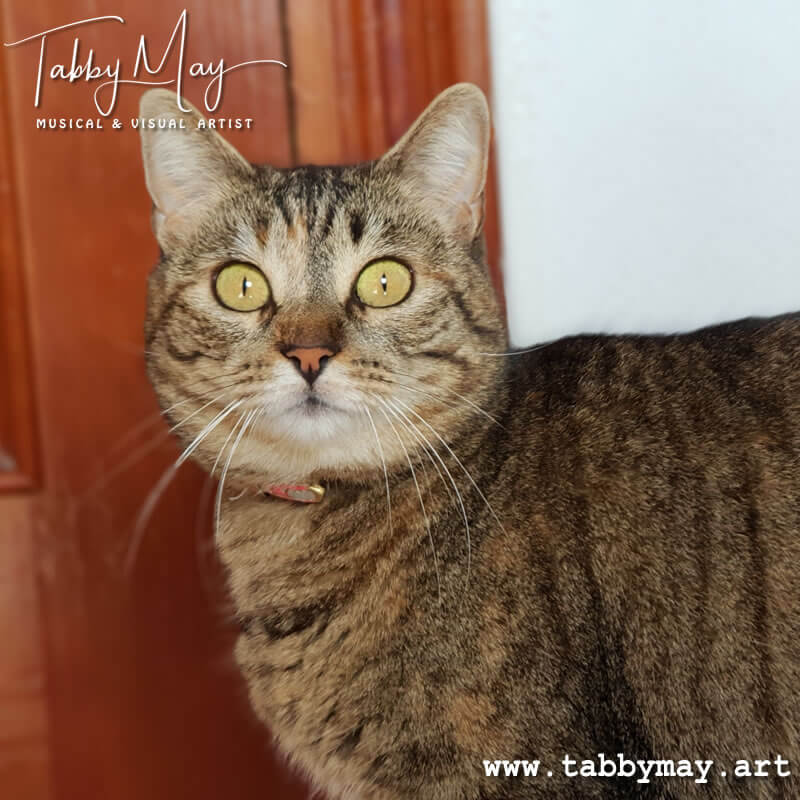 And here we are today, with only one dog and one cat. The kitty was a very young and hungry stray, that suddenly appeared in our garden in 2017. We called her Mercy, for two reasons. Just before she arrived we had said goodbye to our car, a Mercedes. Jokingly I called the cat Mercedes, abbreviated to Mercy, to comfort my hubby that at least he still has a ‘Merc’ left, albeit a caT instead of a caR.

And then there’s Scruffy, a stray dog we adopted in 2018 after I had found him outside the fence around our house. He was a tiny puppy of only 7 or 8 weeks old and looked really scruffy. Which also was the name of a 1980 cartoon my kids used to love when they were little, about a little stray dog called Scruffy.

Well, our Scruffy is a true blessing! He’s is the first dog I know that has humor and plays games. Hide and seek is his favorite game, but he also loves to play tag. And he definitely knows when he’s funny. He’ll repeat his ‘jokes’ over and over, to keep me laughing! He is also the very first dog in my care, that is allowed to sleep in our bedroom, right beside my bedside.

Beside all that, he and Mercy are the best of friends, regularly curled up side by side in front of the gas heater, enjoying each other’s company (and the warmth of the heater, duh! ?)

Their influence on my art 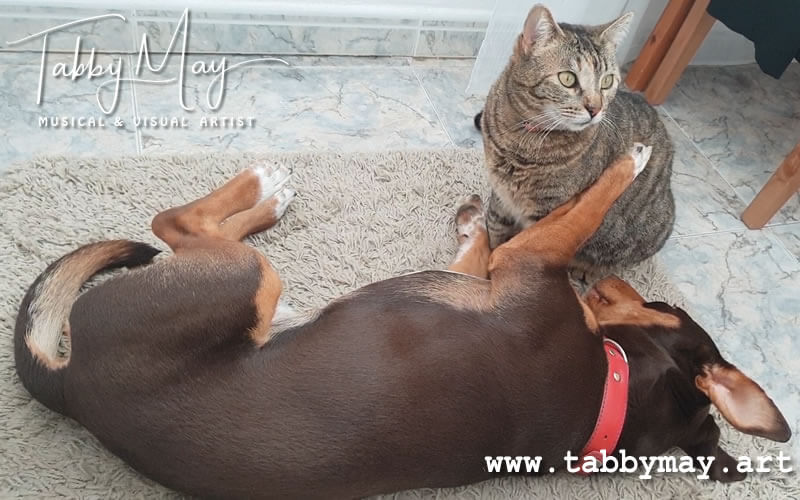 Back to Michelle’s question: how they have shaped your art. I’m thinking on how they’ve impacted my art, but I can’t really think of anything. I think they don’t really impact my art, at least not in a clear way that I can pinpoint.

But they have and still do impact my personality. They keep me sane in hard times, comfort me when I feel depressed or sad. They definitely trigger the caring part in me. I love to care for them, hug them, kiss them, caress them and getting so much more in return from them. And maybe that’s what reflects back in my art… the love for my fur babies, captured in colorful creativity.

What about your lovelies?

Well, that was it for now. Of course I’ve had many more animals than the ones in this blog, and I’ve loved them all. Among them there were a bunch of super sweet rabbits and of course our two terribly noisy Miniature Pinchers Richy & Daisy, about whom I’ve posted earlier. The five furry creatures mentioned in this blog were and are my truly special ones.

Let me know in the comments what special memories you have of your dearest animals and how they impacted your life, ok?

PS See what one little cat can trigger? Thank you Willow! Oh, and here’s a link to a beautiful song by Paul McCartney, called Little Willow…